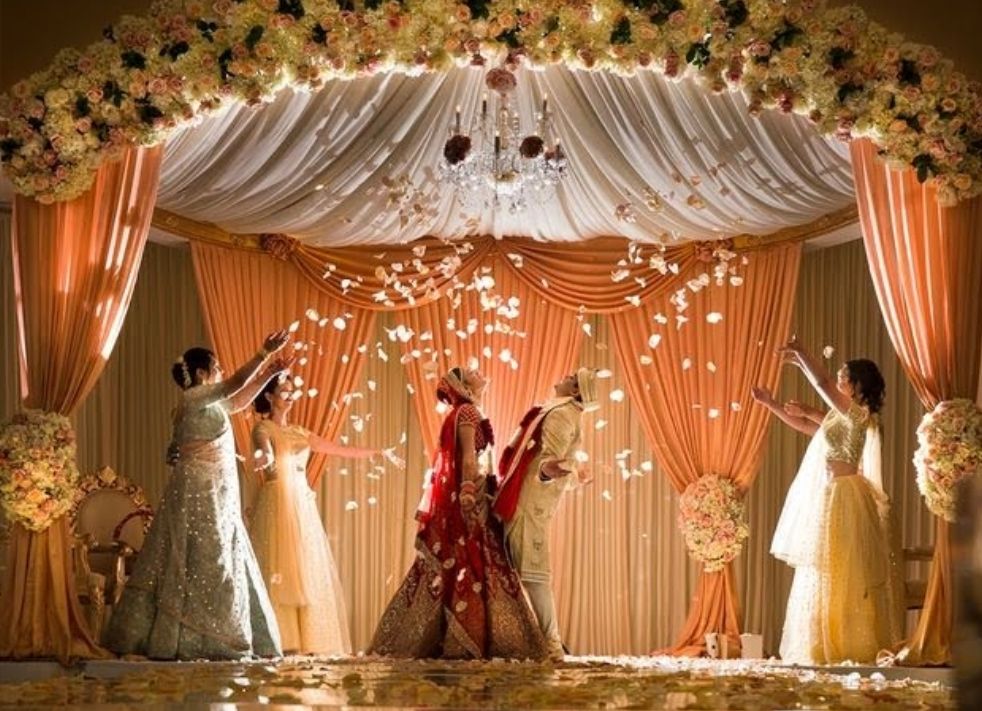 A Hindu wedding is Vivaha (Sanskrit: विवाह[1]) and the wedding ceremony is called Vivaah Sanskar in North India and Kalyanam (generally) in South India.[2][3] Hindus attach a great deal of importance to marriage. The wedding ceremonies are very colourful, and celebrations may extend for several days. The bride's and groom's home—entrance, doors, wall, floor, roof—are sometimes decorated with colors, balloons, and other decorations.[4]

The rituals and process in a Hindu wedding vary widely. Nevertheless, the Hindu wedding ceremony at its core is essentially a Vedic yajna ritual and three key rituals are almost universal: Kanyadaan, Panigrahana, and Saptapadi—which are respectively, giving away of his daughter by the father, voluntarily holding hands near the fire to signify union, and taking seven ‘steps before fire’. (Each ‘step’ is a complete circuit of the fire.)

At each step promises are made by (in the long form—see below) each to the other.[5] The primary witness of a Hindu marriage is the fire-deity (or the Sacred Fire) Agni, in the presence of family and friends.[6] The ceremony is traditionally conducted entirely or at least partially in Sanskrit, considered by Hindus as the language of holy ceremonies. The local language of the bride and groom may also be used. The rituals are prescribed in the Gruhya sutra composed by various rishis such as Baudhayana and Ashvalayana.

The pre-wedding and post-wedding rituals and celebrations vary by region, preference and the resources of the groom, bride and their families. They can range from one day to multi-day events. Pre-wedding ceremonies include engagement, which involves vagdana (betrothal) and lagna-patra (written declaration),[3] and the arrival of the groom's party at the bride's residence, often as a formal procession with dancing and music. The post-wedding ceremonies may include Abhishek, Anna Prashashan, Aashirvadah, and Grihapravesa – the welcoming of the bride to her new home. The wedding marks the start of the Grihastha (householder) stage of life for the new couple.

In India, by law and tradition, no Hindu marriage is binding or complete unless the ritual of seven steps and vows in presence of fire (Saptapadi) is completed by the bride and the groom together.[7] This requirement is under debate, given that several Hindu communities (such as the Nayars of Kerala or Bunts of Tulu Nadu) do not observe these rites.[8]